“As Baxter is a safe robot, and requires no cage, we can have him in the classroom alongside the students and not have to worry about accidents.”

Dr Michael Walters – University of HertfordshireA pair of Baxter robots are now part of the School of Computer Science at the University of Hertfordshire. The school also includes the Adaptive Systems Research Group (ASRG) which is an internationally renowned multidisciplinary group well known for their research into artificial life, cognitive robotics and service robots.

Within the group there is a specific emphasis on the study of Human-Robot Interaction (HRI), such as the use of robots in assisting the developmental process of people with autism spectrum disorder.

Over the years the ASRG has developed a number of their own robot systems for their work, KASPAR being the most well-known. These have now been augmented by a pair of Baxter robots; one for undergraduate teaching and the other for post graduate research.

Dr Michael Walters is a Senior Lecturer in the School of Computer Science and also works with other members of the ASRG on various research projects. These include the KASPAR project, and also the EU funded ACCOMOPANY Project which focuses on developing companion robots for elderly people in order to maintain their independence for longer within their home environment.

“In terms of HRI research we are one of the major groups in the world. Prof. Kerstin Dautenhahn and Prof. Chrystopher Nehaniv are the joint leaders and major force leading the group” says Dr Walters “We have around 30+ postgrads and academics who are member of the ASRG engaged in research at the moment. It’s a multidisciplinary group: we have mathematicians, engineers, computer scientists, roboticists, psychologists, artificial intelligence and cognitive science staff working on a variety of research projects.”

As a result of their international standing they get both quality and quantity of students applying to the University to do their post graduate research and, increasingly, under-graduates as well.

“We’re using the reputation and expertise of the ASRG to build up the content of our under graduate courses at the moment.” continues Walters “This, as well as the success we have had with our football-playing RoboCup team, is leading to an increase in applications for our courses.”

“The undergraduates start off with a simple small mobile robot system – they even get to take them home and can become quite attached to them – so they can learn the principles of programming and control before moving onto larger systems such as Baxter.”

“As Baxter is a safe robot, and requires no cage, we can have him in the classroom alongside the students and not have to worry about accidents – and that’s especially important when you are looking after a class size of around 40 undergraduates.”

“Baxter is used in the 2nd year of our degree courses – and we are currently developing new course content to expand the use of Baxter. There is a lot of practical work in the 2nd year and then more focused project work in their final year and Baxter will also be used to support this.”

For post-graduate research the second Baxter will either be located either in the Science and Technology Research Institute (STRI) at the University or our Robot House. 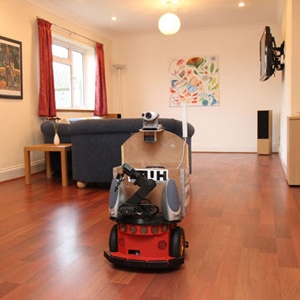 The STRI is where KASPER and iCub are kept, along with a number of other robots that have been developed. “The robots which are built in house – some have arms – but they are either not as accurate as Baxter with respect to positioning, or are too dangerous to be used with people around.” says Waters “Currently, they are more used for gesturing and expressive behaviour, such as with KASPAR. So it will be interesting to develop research projects using the better manipulation capabilities of Baxter.”

Walters concludes “Our Robot House is where we can simulate very accurately a home environment and develop robots that are ‘user-friendly’ companions that assist people at home, typically for care or convalescence. It will be interesting to see how Baxter can be used in this environment alongside our other care robots, Sunflower and Care-O-Bot.” 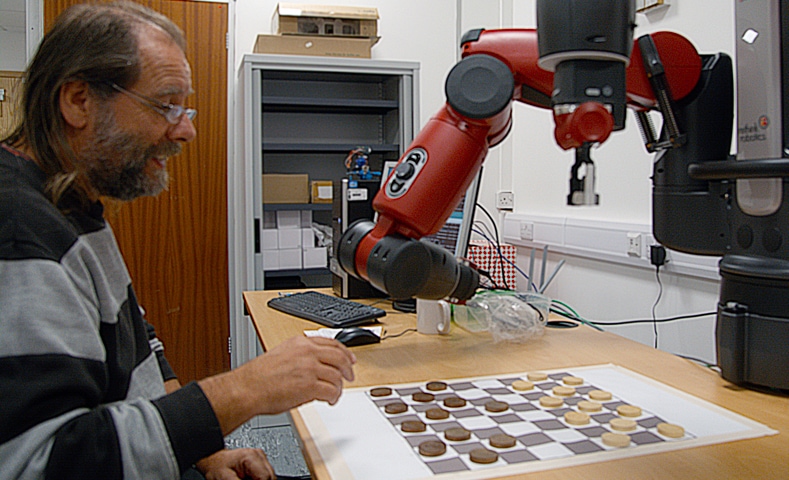 Dr Michael Walters enjoying a game of draughts with Baxter – your move Baxter!

“The folks at Active8 Robots have been very helpful in getting us started with Baxter – although he is pretty easy to use, so we’ve not needed too much support. We’ve also had a look in the Baxter Wiki to see what information is there and that seems a useful resource as well. For example, we’ve programmed Baxter to play draughts as a learning exercise for ourselves and this we did – along with all of our other duties – in just a couple of weeks!”