“Baxter is a good system for my work and was chosen because of his compliant joints, the excellent hardware and is good value compared to other systems.”

Baxter has certainly been earning his keep since being delivered to the School of Computing and Mathematics at the University of Plymouth just 9 months ago.

With a range of under- and post-graduate courses involving robotics, as well as several PhD students using Baxter for their research, he’s been very much in demand.

The university has a strong heritage in robotics research – dating back to 1998 – and has even created their own promotional YouTube video for the university and their robotic courses.

Peidong Liang is from China and is studying for his PhD in Human / Robot co-operation, “My work focuses on transferring human skills to robots via teleoperation with the ultimate benefit of making a more human-like control. Baxter is a good system for my work and was chosen because of his compliant joints, the excellent hardware and is good value compared to other systems.”

“We use a variety of techniques such as the use of haptic devices to telecontrol Baxter using an analysis of the kinematics of both, a workspace mapping between the two allows for motion and force equivalents to be communicated.”

Using a Kinect motion detection system to track the movements of a human (the same system used as a game controller) Baxter can be programmed to follow and emulate the human’s movements. 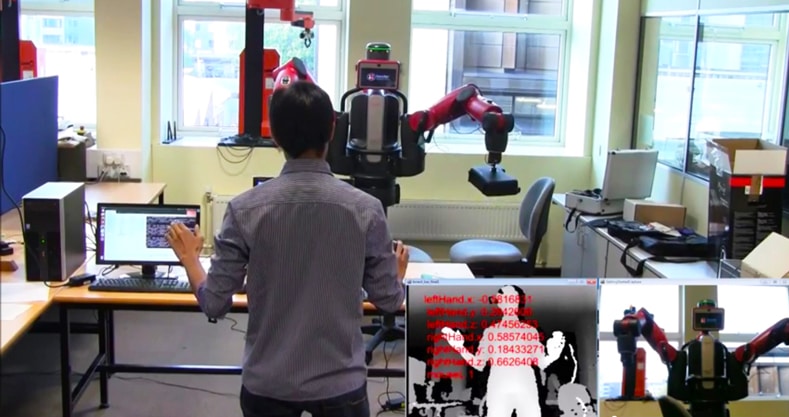 Brazilian researcher, Ricardo de Azambuja is studying for his PhD “My research is related to the application of biological inspired neural networks – spiking neural networks (SNN) – within a robot control system using principles from action learning and embodiment.”

“So far I have implemented a system in Python that makes it possible to control Baxter using an SNN” de Azambuja continues, “In fact not only controlling Baxter, but making him learn through the interaction within his environment.”

“My aim is to develop a very simple artificial ‘brain’ for Baxter so that he is better able to deal with information that is not clear and deterministic.”

German student, Caroline Bahrdt is completing her MSc in Robotics & Electrical Engineering, and like Liang, is also interested in the subject of teleoperation.

“I like working with Baxter it’s a simple and compact robot, easy to get into and understand for programming and control” says Barhdt “I like very much the practical aspects of this work rather than just focusing on the theory all the time.”

The final researcher Junshen Chen, who is also from China, is finishing his MSc with a Baxter based project involving the Kinect motion detector interface. He’s found it fast and easy to learn the system. Chen says “Baxter is very simple to learn and pick up it’s perfect for short project work.”

Happy Baxter researchers at the University of Plymouth, School of Computing & Mathematics.

All of the researchers agree that the quick to learn and hands-on aspects of Baxter have helped with their studies and the ability to further their careers in the longer term, either within academia or out in the commercial world.

The students are highly motivated to carry out research work using Baxter and in the few months since the he arrived at Plymouth, several research papers have already been published. These include:

The relevant experimental videos have also been uploaded unto their YouTube channel.