Why collaborative robots are bringing work back home

Offshoring has long been an issue for both businesses and employees but for completely different reasons. However, with the development of low-cost robotics offshoring is not only happening less, but reshoring is increasingly happening.

What is offshoring and reshoring?

Offshoring is the relocation, by a company, of a business process from one country to another—typically an operational process, such as manufacturing, to a country where wage and operating costs are lower. This typically happens for manual factory processes where labour costs are the main expenditure for the business. A usual rationale for offshoring is that by moving low-skilled manufacturing jobs overseas, then higher skilled research and development jobs can be kept locally therefore keeping innovation and technology at its best.

Reshoring is the process of bringing back the work which was previously offshored and this can happen for a number of reasons, whether for financial, quality or ethical purposes. With increasing Asian labour rates, consumer demand for ethically produced goods and the subsequent exposure of exploited workers working in poor conditions there has been an increase in work being returned to the UK. The first to do so was the telecoms industry with numerous call centres returning to the UK due to popular consumer demand because of low quality.

Why the demand for reshoring?

Due to increasing labour rates (18% in China a year, 500% in the last 12 years), miscalculation of the Total Cost of Ownership and consumer demand for ethically produced, carbon friendly products offshoring is decreasing and there is a growing trend for reshoring. With the development of low cost collaborative robots, such as the Baxter Manufacturing Robot, businesses can bring manufacturing work back to their domestic market through cost effective robots which can deliver return on investment in as little as 12 months. It is becoming increasingly apparent to businesses throughout the world that their grand plan to offshore and save money wasn’t quite the cost saving honeypot they had imagined it to be. In 2010 Harry Moser created the Reshoring Initiative to bring manufacturing jobs back to the USA through the realisation that offshoring may not be all it seems. By localising production and sourcing manufacturers can often reduce their Total Cost of Ownership of purchased parts and tooling and that through reshoring, manufacturing in the United States is starting to gain momentum. You can work out your Total Cost of Ownership at www.reshorenow.org.

How can smart, collaborative robots help?

Smart, collaborative robots such as the Baxter Robot can seamlessly integrate alongside existing staff, without the need for safety cages, time consuming and costly programming and they also cut out the need for extensive health and safety red tape reviews and training. These co-bots (collaborative robots), are intelligent and can adapt to their surroundings, react safely to the presence of humans and have in-built safety mechanisms conforming to ISO 10218 so they won’t be featured on next week’s episode of Bad Robots.

The Baxter Manufacturing Robot can be used to perform menial, labour intensive tasks to exacting standards time and time again, freeing up staff to perform other functions within the business to make best use of existing resources. 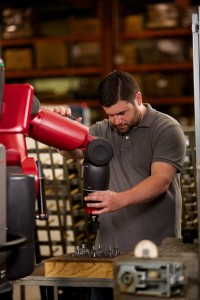 With a low starting cost of £19,000/ 22,000€ the Baxter Robot isn’t a massive investment and can quickly provide a return on investment. Although technically a co-worker, Baxter doesn’t need coffee breaks, holidays, get sick or require a pension scheme contribution so is productive 100% of the time. Baxter has been documented in the USA to have worked 2,160 continuous hours and can easily be redeployed across tasks without the need for expensive, time consuming re-programming.

The Baxter Robot by Rethink Robotics is available now in the UK and Europe through Active8 Robots at www.active8robots.com.gridhosted.co.uk.