It was more than two years ago that the UK voted to leave the EU, yet it seems the future is still uncertain. What is certain however, is that at 11pm local time on March 29th 2019, the UK is scheduled to leave the EU. Still to be decided is what precisely will happen on Brexit day, what kind of deal, if any, Britain will leave with and the final destination of the negotiations. Many are predicting a Hard Brexit, and in anticipation of this, UK manufacturers should be preparing for this change.

With no certainty yet over trade tariffs, freedom of movement for workers, or safety legislation, what could be the impact for British manufacturers? A proactive approach to a hard Brexit could help to cement Britain’s future in international markets, by encouraging them to utilise industry 4.0 technologies. British manufacturers have faced difficult economic times in the past, but they are now at a critical point. Brexit does however, present opportunities as well as threats, as manufacturers must now focus on their future markets, technologies and potential trade partners.

Antony, the Managing Director of Active8 Robots has previously said that “We should get on with dealing with what we do know, no matter what happens with Brexit, we know we will be competing in a worldwide market and now is a critical time for large and small businesses to get competitive”.

The UK currently employs a lot of temporary labour, for simple tasks such as packing and picking. As a result of the Brexit vote we are in danger of losing this workforce, so many firms are now looking for a back-up strategy. More and more companies are setting aside a budget for automation. Although the UK has been slow to adopt robotics, its approach to automation is now changing, and this could be due to Brexit.

John Glen, Economist, Chartered Institute of Procurement & Supply (CIPS), says that businesses should begin considering ways which will help them improve the efficiency of their supply chain, such as embracing new technologies and automating processes. Accelerating the implementation of automation in industry could allow for the scaling up of manufacturing volume, which could enable businesses to meet potential demands from global markets. The technology is also expected to help drive down the cost of production to enable Britain to compete with global prices, and to allow efficient adaption and development of new products and strategies for new trade partners. 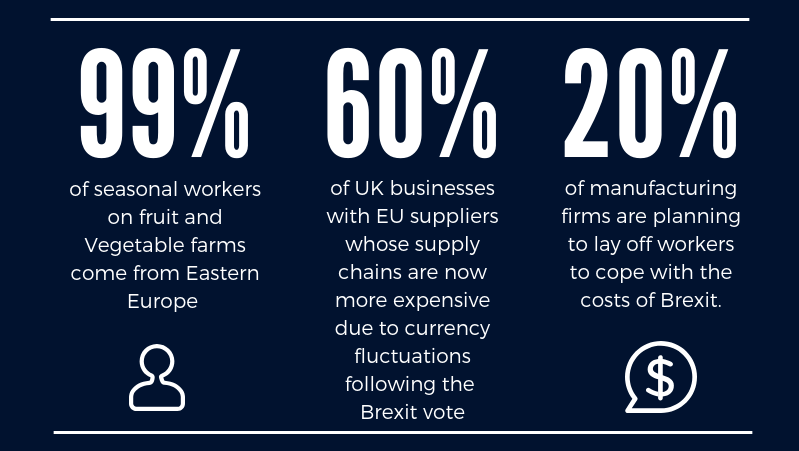 “Collaborative Robots are a quick win for productivity, with an average ROI of 6-8 months” says Antony, MD of Active8 Robots. It gives the UK more of a chance within the worldwide productivity race. “Productivity isn’t everything but in the long run it is almost everything,” said Paul Krugman, the Nobel Prize-winning economist, in 1994.

However, it is important to remember that humans will not become obsolete. Cobots will allow the UK to make products better and less expensive, which will enable the UK to win an increased market share and be more profitable, which will in turn lead to more jobs for humans.

Active8 Robots helps businesses by using a new generation of Collaborative Robots.These are a type of robot designed to work collaboratively in their environment. They are small, inexpensive and able to work alongside people without huge cages. This means that smaller parts of a production line can be easily automated, allowing businesses to use their staff for more important tasks and the robots just work away at the dull bits. Automation is therefore, now in reach of small and medium business. Offering a complete service, from site surveys to installation, tool supply, design & manufacture, along with all the training and support, Active8 Robots is the only company to offer a full package end to end for its customers.

Active8 robots has worked with many businesses small and large, most often in production, co-packing and the higher education sectors having robots in dozens of universities and research establishments nationwide. We would be keen to talk to you, about how we can help Brexit-proof your business- Contact us for more information.