Today the UK Parliament has played host to its first non-human witness; Pepper, the robot. The AI-enabled robot was called before a Commons Committee to give evidence on the future of technology in society. “This is not about someone bringing an electronic toy robot and doing a demonstration,” said Committee chair Robert Halfon. ‘It’s about showing the potential of robotics and artificial intelligence and the impact it has on skills.’ 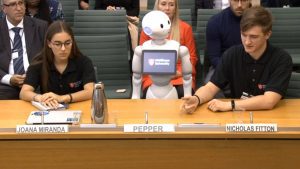 Pepper is part of an international research project developing the world’s first culturally aware robots aimed at assisting with care for older people and in STEM education. The Committee heard about her work with students across the faculties at Middlesex University, including a project involving teaching primary level children, and what role increased automation and robotics might play in the workplace and classroom of the future.

Automation in the Workplace

The Committee first questioned a panel of experts on the suitability of the current school curriculum, and how life long learning should interlink with the 4th Industrial Revolution. Pepper reassured her questioners, insisting that humans will never be made obsolete because we have “soft-skills” that robots cannot reproduce. It was discussed during the committee that re-skilling and upskilling should be important in the future, but that ensuring this requires the right collaboration between bosses and workers. It was also said that our culture around learning should change, and we should no longer accept that the learning process finishes with your education, but instead that learning is a life-long process. This comes with the idea that technology will never stop changing and improving; we need to change and adapt with it.

Further to this it was mentioned that the workers at the “bottom” may be the most affected as it is their jobs that are said to be being replaced by autonomy, however it was argued that there are robots being developed to perform brain surgery and defuse bombs. One panel member it was possible that these will be the jobs affected as these are the jobs where the higher salary can be saved. It all depends on whether the infrastructure and technology are worth investing in, and this is something that will only be known with time. Although automation will grow to become a big part of our future, it is humans who need to drive value from this new technology; a new way of thinking is needed by tomorrow’s workers.

The idea of how lessons should be taught were also discussed; whether resources like Pepper were worth investing in to be present in the classroom. It was explained that Robots like Pepper are not just a means of engaging students but that there is a deeper level of learning to be had through making subjects practical and interactive. This notion of embodied learning was said to be an area that should be built upon, as with the development of modern technology comes opportunity for tactile and sensory feedback. Furthermore, they discussed that the subject of computing shouldn’t just be seen as “typing on a keyboard with a screen” but that it should be about driver-less cars, and phones and cameras.

The panel from Middlesex University said that learning should be more about problem solving and exploring than it should about memorising and regurgitating information. It was discussed that the performance-based approach is causing failure to become the norm, and that instead we should be taught to ask ourselves, “we may have failed, but what have we learned?”.

It was stated by one of the teachers on the committee that having something like Pepper in the classroom would be an extra challenge for them; something extra to learn and something extra to set up in the morning. However, this was quickly rebuffed by the witnesses, who explained that if it is going to improve a child’s education, then it should be worth it for the teacher. On top of this, by the time a child gets to year 5 or 6 it will probably be the case that they’ll be able to program the robot for the teacher. This comes back to the idea that we should stop celebrating ignorance; teachers and workers alike should be committed to this lifelong learning in order to keep up with technology and the world around us.

A final subject that was broached in the discussion was women in STEM careers. One of the panel said  “women in stem is something that we want, that inequality needs to be removed… equal performance should lead to equal opportunities”. Joana Miranda, a student studying Robotics Engineering at Middlesex University followed on to say that we need to get rid of the stigma around women in Engineering.

Active Robots are a distributor of multiple types of STEM Education resources, such as the Nao Robot with Zora Solution and LEGO® Education Range.