Will Opportunity Rover ever phone-home again?

Opportunity Rover is Nasa’s longest-lived robot on Mars, but there are worries that it may not survive much longer. The golf-cart-size robot landed on Mars in January 2004, followed three weeks later by Spirit, its twin, which landed on a different part of the Red Planet.

Both robots were initially on a three- month mission to hunt for signs of water activity. Both successfully found such evidence, and then continued to explore the planet for months after their three-month anticipated life-span.

Spirit finally stopped being active after getting stuck in a sand tap in 2010, but Opportunity remained resilient. Opportunity has gone on to travel farther on the surface of any other world than any other vehicle, robotic or crewed.

The threat Opportunity is under is very real. As the rover is unable to operate its onboard heaters in its current state there is a chance that Opportunity could freeze to death if the temperature drops low enough. The cold temperatures can snap electronic circuits inside the Rover if they aren’t warmed.

The storm did appear to be passing last month, and the skies are beginning to clear. However, it is thought that it will take an extended period of sunny weather to wake up Opportunity, if the rover is still alive. There is also the chance that dust may have settled on the solar panels of Opportunity, meaning it won’t be able to recharge at all.

NASA officials have said that mission team members are also pinging Opportunity regularly during scheduled “wake-up times” and are listening for a response.

Even if the rover does wake up, it almost certainly won’t get back to its job straight away, the robot has undergone quite a traumatic experience. Steve Squyres, mission scientific principal investigator, said that “it will therefore probably take a few weeks to bring Opportunity out of whatever “fault mode” it has fallen into”.

“It’s either going to be a miraculous recovery, or an honourable death,” Squyres said. 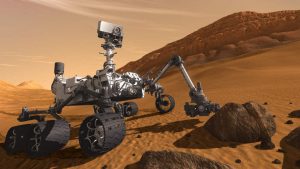 On the up side, all this tempestuous weather surrounding Mars has meant that the red planet has been even more red and clearly visible from Earth, making for some great photo opportunities from around the UK.

If you want to know more about Opportunity or the sand storm on Mars then listen to Space Nuts Podcast.